About Your Angelic Healer. 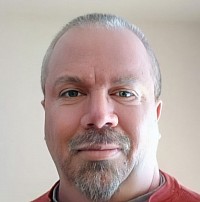 Tony is a privately taught Angelic Healer and has been sending Angelic Healing All Over The World since 2013.

He is a Highly Intuitive Energy Sensitive Empath with a lot of friends in the Spirit Realm. He is known by some in the Paranormal Community as a Spirit Keeper. He is also active in the Spiritual Community and was awarded a Spiritual Lordship in February 2015. He is also recognized as The Lord Guardian over The Order of The Purple Cord. In February 2016 he was awarded a Spiritual Knighthood and is also recognized as The Grand Master of The Knights of Horus.

This is a brief history of his life.

I was born in Minneapolis Minnesota in 1968.  Shortly afterwards my father was transferred to Chicago Illinois and we all moved. I lived in a nice neighborhood with nice kids to play with until the summer of 1972.  I ran out in front of a moving car and was hit...Hard!

Miraculously I got up and walked to the curb and laid down in the grass. I felt no pain!  I looked up only to see that I was surrounded by people who I didn't know and I closed my eyes.  I found out later that these were my spirit guide's making sure I was alright.  I woke up 2 days later in the hospital, I had been in a coma according to my mother.  At one point I remember floating above my bed and seeing my mother crying in the hallway while I was unconscious.  I was screaming for her to come to me but she couldn't hear me.  Then everything faded and was gone.  I spent 2 weeks in the hospital with a head and neck injury and no memory of my life before the accident. I knew who my family was but nothing else. The rest of my childhood was spent being a normal kid aside from having migraine headaches and weird dreams.

Fast forward to 2006.  My family and I moved into "unknown to us," a Very Spiritually Active house in the very northern burbs of Minneapolis Minnesota.  Things were happening to me, because of moving into this house, that caused me to do a lot of research on the paranormal and metaphysics.  I started meditating and was making lots of good friends in the metaphysical community.  I know this is getting a bit long but this is where I also met my friend Kimmie who "Re-taught" me how to Heal with light and energy and gave me the name "Lightbringer". Notice I didn't mention Angelic with Heal?  Please read on.

From what I have learned, during the time I was in a coma, I was supposed to have died but I was given an extension of my life because I had a very important mission to complete.  I had been gifted with the light, the energies and the knowledge of the Nine Orders of the Angel's AND The Select Ones! All lying dormant until the right time. That time is now! Makes sense to me considering all the dreams I had been having. Now is where Angelic Healer comes in. All the healing work I've been doing has been me channeling my inner Angelic Energies and transmuting their healing through me to you!

Made with SimDif
Tony A. Paulson